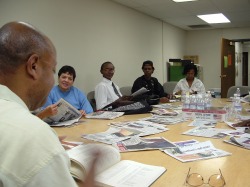 And what is the news?  News is the communication of information on current events which is presented by print, broadcast, Internet, or word of mouth to a third party or mass audience.  But what is journalism really?  Journalism is often defined as the collection, preparation, and distribution of news and related commentary and feature materials through media such as the Internet, news albums, pamphlets, newsletters, newspapers, magazines, radio, film, television, and books.

The print version of the CV Drum News is a "news album," (the first of its genre worldwide).  We focus primarily on positive news stories that showcase African-American leaders, communities and organizations throughout the Central Valley.  We also feature African world news that is national and international.  The journalistic underpinning we practice is Russwurmian Journalism, which comes from the African-centered advocacy style of John Russwurm, the co-founder of Freedom's Journal, the nation's first African-American newspaper (New York, 1827).

There are other better and richer forms of journalism practiced today besides the negative tradition of "if it bleeds, it leads!" 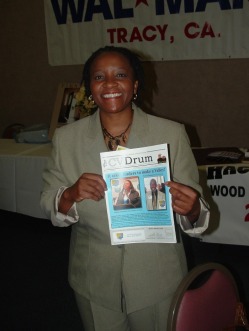 (Left photo is of Naomi Tutu holding a copy of the CV Drum News, while visiting the city of Tracy.  Naomi is the daughter of Bishop Desmond Tutu of South Africa/Azania.)

Advocacy Journalism - Advocacy journalists have an opinion about the story they are writing.  They adopt a non-objective viewpoint, usually for a social or political purpose.  Advocacy journalists also serve a similar role to muckrakers or whistleblowers.
Civic Journalism - According to the Pew Center for Civic Journalism, civic journalism "is both a philosophy and a set of values supported by some evolving techniques to reflect both of those in journalism. At its heart is a belief that journalism has an obligation to public life – an obligation that goes beyond just telling the news or unloading lots of facts. The way we do our journalism affects the way public life goes."
Investigative Journalism - Investigative journalism is a type of reporting in which reporters deeply investigate a topic of interest that is thought to be of interest to news audiences.
Citizen Journalism - Citizen journalism has sometimes been described as individuals "playing an active role in the process of collecting, reporting, analyzing and disseminating news and information."
Community Journalism - Community journalism is locally oriented, professional news coverage that typically focuses on city neighborhoods, individual suburbs or small towns, rather than metropolitan, state, national or world news.

The future of journalism, and in particular, daily newspapers:  The CV Drum News is not a daily newspaper, and this is critical to note.  It is a proud member of the nation's growing ethnic, weekly and community news tradition (today totaling nearly 6,000 publications, and growing in circulation, advertising revenue and socio-political importance).  While much of the national discussion and debate of the future of newspapers have been centered on the declining presence of daily newspapers facing soaring newsprint prices, slumping ad sales, the loss of much classified advertising and precipitous drops in circulation, this is not the overall case of the aforementioned news outlets. Another concern is that because of the Internet, online publications will now replace printed versions.  While it seems true that print media will need to adapt to the reading habits of newer readers and diverse audiences, it is highly unlikely that print journalism will become extinct.  Just as television did not eliminate the radio industry, and cable and satellite capabilities will not eliminate the film industry, a mutually beneficial relationship between print journalism and the Internet continues to emerge.  Also fortunately, the advertising industry, as well as other consumer and leadership stakeholders are now focusing on this reality.
The CV Drum News' message to NABJ, the NNPA, NABOB, NAMME, UNITY and NAM: Continued success and take a good look at the TALO Leadership Theory!
And sources for the journalism scholar and researcher
If you are interested in working for the CV Drum News as a photographer, writer or advertising accounts rep,
please call or email us @ (209) 403-6356 or email @ cvdrumnews@invrhhew.org or go to the Contact Page.
Return to top of page