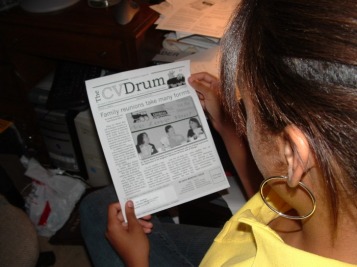 We are a "printed and online news album" so we cover hard news, features and...lots of photos!

Interested in subscribing?  Click here, fill out the form and return it electronically or via ground mail.  Thank you.
"CV Decision Makers" covers California's Central Coast Region from Santa Cruz to Santa Barbara

Pictured below is Archbishop Desmond Tutu enjoying the CV Drum News while in Modesto, California. 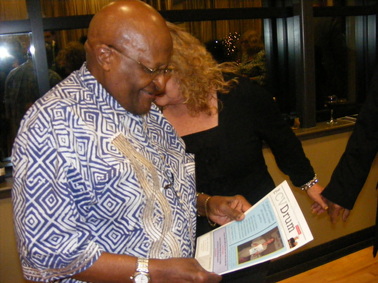 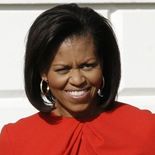 We were at the University of California, Merced (in California's Central Valley) when former First Lady Michelle Obama addressed the university's first full graduating class (May 2009) as commencement speaker.  Out of the thousands of colleges and universities in the country, Mrs. Obama chose to visit the Central Valley.  As practitioners of advocacy journalism, we are in favor of the creation of an African-American Studies program at UC-Merced. 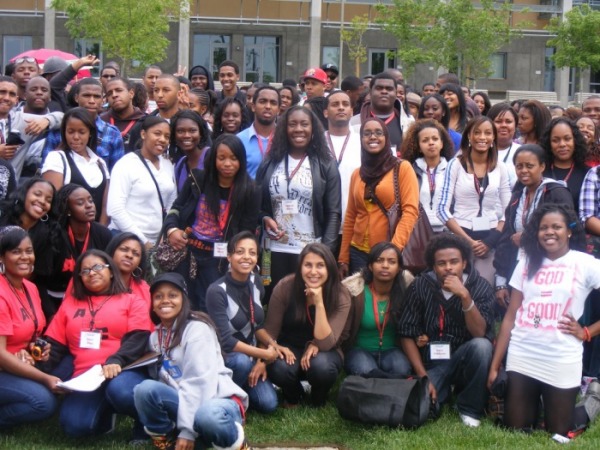 Students from all ten University of California campuses attended the 2009 African-Black Coalition Conference at UC-Merced. 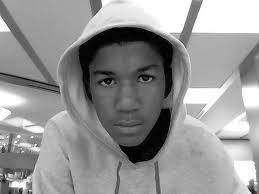 Final Exam Four college friends were so confident that the weekend before finals, they decided to go up to Dallas and party with some friends up there. They had a great time. However, after all the partying, they slept all day Sunday and didn't make it back to Austin until early Monday morning. Rather than taking the final then, they decided to find their professor after the final and explain to him why they missed it.

They explained that they had gone to Dallas for the weekend with the plan to come back and study but, unfortunately, they had a flat tire on the way back, didn't have a spare, and couldn't get help for a long time. As a result, they missed the final.

The Professor thought it over and then agreed they could make up the final the following day. The guys were elated and relieved. They studied that night and went in the next day at the time the professor had told them. He placed them in separate rooms and handed each of them a test booklet, and told them to begin.

They looked at the first problem, worth 5 points. It was something simple about free radical formation. "Cool," they thought at the same time, each one in his separate room. "This is going to be easy." Each finished the problem and then turned the page. On the second page was written: (For 95 points): Which tire? 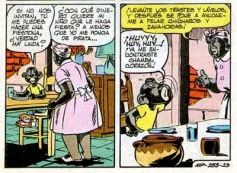 In 2005 the year the CV Drum News was launched, at a community forum in Modesto sponsored by the Stanislaus County NAACP, we directly asked Mexican officials to explain and justify such a blatantly racist cartoon that depicted its Afro-Mexican character as ape-like.

Regarding "white privilege," Dr. Peggy McIntosh, founder and co-director of the National S.E.E.D. Project on Inclusive Curriculum (Seeking Educational Equity and Diversity) said, “I think [we] whites are carefully taught not to recognize white privilege, as males are taught not to recognize male privilege. So I have begun in an untutored way to ask what it is like to have white privilege. I have come to see white privilege as an invisible package of unearned assets that I can count on cashing in each day, but about which I was ‘meant’ to remain oblivious. White privilege is like an invisible weightless knapsack of special provisions, maps, passports, codebooks, visas, clothes, tools, and blank checks."
We cover...African Re-empowerment such as Sacramento's Congress of African Peoples (CAP) Annual Conference - and the United Nation's Year of Women of Color (click here for Sacramento photos that celebrate this international observance).

Decision Makers publications, like its parent organization, INVR Standards / HHEW, focuses on re-empowerment instead of empowerment, because it is our belief that power is already deeply rooted throughout African communities in the Central Valley and beyond, therefore, it is our role to showcase this power.  Talk of empowerment, on the other hand, suggests that a person or organization has the "power" to empower.  This is questionable and flawed.

We honor the legacies of our elders 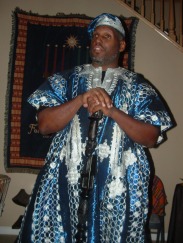 The CV Drum News does not cover events, we cover events that matter...that have a clear purpose and are interested in building on the principles of the TALO Leadership Theory. 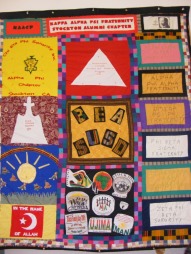 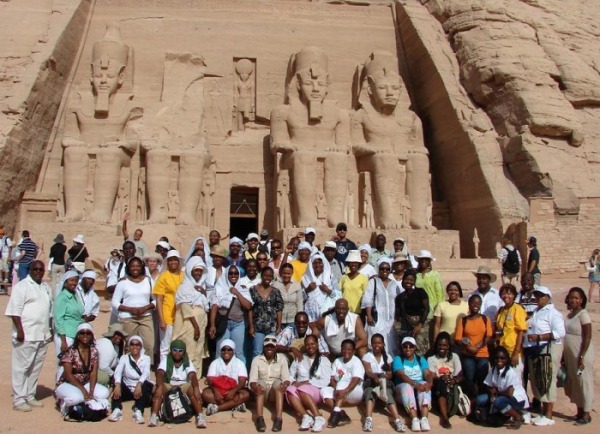 This photo (right) was taken in Egypt, a long way from the Central Valley, but it best represents the essence of the CV Drum News, as a news media that is African-centered 24/7.

Did you know that Stockton has a sister city in Nigeria?  Asaba, Nigeria

Did you know that California was named after a black woman? Queen Califia

Did you know that the African-American story is central to the creation of the University of California system?

See (or back order) the May/June 2009 issue/episode of the CV Drum News to learn more about the role of African-Americans in the creation of the nation's land grant universities, from the University of California system to Florida A&M to MIT. 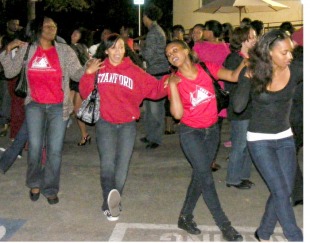 Pictured left are members of Delta Sigma Theta, Inc. (Stanford University's undergraduate chapter) entertaining attendees outside the Black House at Stanford University.  We actually love the San Francisco Bay Area, however we constantly have to remind folks from and in the Bay Area that their roots are also in Texas, Oklahoma, Louisiana, Mississippi and Arkansas -- just like most of the black folks in the Central Valley!  (Editor's Note: the CV Drum News editor has his deep roots in Virginia and New York, and many others in the Central Valley have their roots in the Caribbean and Africa).

For more local Bay Area African-American news, visit one of these fine sources, and tell them we sent you!

There are also five other African-American newspapers in the Central Valley that we wish to acknowledge and encourage the Valley to support: The Bakersfield News Observer, the California Advocate (Fresno), the Central Valley Voice (Merced), the Sacramento Observer and Sac Cultural Hub.
If you are interested in working for as a photographer, writer or advertising accounts rep,
please call or email us @ (209) 403-6356 or email @ cvdecisions@invrhhew.org or go to the Contact Page.
Interested in subscribing or advertising now?  Back click the appropriate link.  Thank you.
Return to the top of the page
Return to the Home Page
A member of Slate Hill Major Media

Are you a decision maker or leader? Then what is your leadership profile?